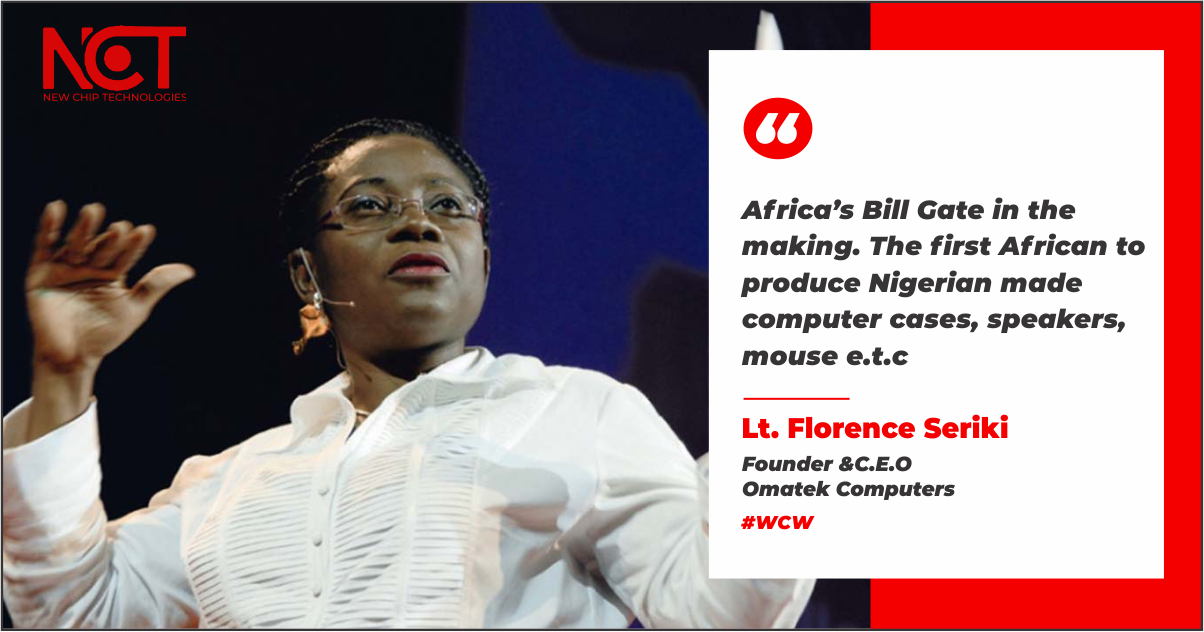 Have you met ‘Africa’s Bill Gates in the making? Am sure you haven’t, well she is our woman crush wednesday (WCW) this week and yeah!! she is a woman.#WCW is @Florence Seriki though late but she remained an inspirational figure to generations of African men and women and her act earned her the title ‘Africa’s Bill Gates in the making’. click https://newchiptech.com/blog to find out more about her.

Florence Seriki hails from Delta State but was born in Lagos State Nigeria on the 16th August,1963. She is the founder of Omatek,Nigeria’s first Indigenous computer manufacturing company. Omatek brand of computers was launched in 1993 during the CTO exhibition.She was known as a trailblazing entrepreneur whose entrepreneurial dexterity in the technology space put Nigeria on the global map.

It is worthy of note that in 2008, Omatek became Nigeria’s only publicly quoted computer manufacturing computer.Florence zeal and passion for the industry pushed her to provide IT tools massively for the Nigerian Government computer Assisted program under the CAN computer acquisition program for Nigerian civil servants as part of the efforts to re-engineer the public service for more efficiency.

Florence had a sterling character that made her an inspiration.Her contribution to the development of Information Communication Technology ICT in Nigeria and Africa at large has earned her many recognition and awards such as the Young Entrepreneurship Award of the Nigerian American Chamber of Commerce in1992 and its earned her the title Africa’s Bill Gates in the making’. She was also the recipient of the Nigeria’s highest National honours in the Umaru Musa Yar’adua administration and was also recognized as the IT personality of the year at the National Information Technology Awards organized by the Nigeria Computer Society(NCS). Her awards and recognition is over a hundred and fifty both national and international.

Florence maybe late but history acknowledges her as the first African to produce Nigerian made computer cases,speakers,keyboards and mouse as her factory produced made in Nigeria omatek computers. She deserves to be crush on!!! Sadly she died at the Lagos State University Teaching Hospital on friday 3rd march 2017.

The question now is,are there still woman who are ready to make history like her?